** all newspaper clippings are from newspapers.com . If you are doing serious historical research, I recommend paying for a subscription. It is absolutely invaluable. The British Columbia Distillery Company of New Westminster, BC, was founded in 1903 before June 9 as the Vancouver Semi-Weekly World announced that day (p.5): It was touted as British Columbia's first distillery ( Chilliwack Progress December 17, 1952 p.10), undoubtedly, there had been stills in the province for decades, but this was the first official one. By 1910 BCDC was well established in Sappertown, and supplied products throughout BC, the Yukon, Western Canada, and the U.S., as well as "... the remotest ends of the earth and especially into every part of civilization where rye whiskey is appreciated." (B. C. Saturday Sunset, New Westminster, July 10, 1910:54). During World War I, the British Columbia Distillery apparently sent whisky to Scotland and France (or at least they were looking into it): On
Post a Comment
Read more

A neighbour the other day asked me to look at a cool bottle she had in her house. It was a Ricketts' bottle, made in the three-piece mould that transformed the bottle making industry starting in the 1820s. Olive Jones, in 1982, wrote an article called "The Contribution of the Ricketts' Mold To the Manufacture of the English 'Wine' Bottle, 1820-1850." It had been found on a beach in Europe somewhere. Before Ricketts' mould, bottle makers had been using a "dip mould." This was a mould that would have been shaped like a large cup - and that helped make bottles a more standard size. The body of the bottle was made in the dip mould, but the rest of the bottle was shaped by hand. The shoulder, neck, and finish of the bottles were, therefore, not very uniform and often had a bulge where the top of the dip mould ended. Henry Ricketts, in 1821, patented the first mould that shaped not only the body of the bottle, but also the shoulder and neck. It added
Post a Comment
Read more

In this collection from False Creek that I've been studying, I've noticed a couple of things about French-made bottles. It appears that the French didn't like to have mould seams on their bottles. There is evidence on at least some of them that they either used turn moulds or they heat-treated their bottles after they were made to remove the seams. This is only an hypothesis. And as of yet I have no proof. But here is a Perrier bottle. Perrier in 1910 got Owens Machines with which to make their bottles. The feathered scar on the bottom is the telling characteristic of Owens machines.   This bottle is also from Perrier, but my hypothesis is that it looks like heat-treated may have been applied after production to remove mould seams and blur the feathered Owens scar. The Owens scar is maybe a bit of a stretch, but the mould seams definitely look like they've been mostly obliterated. bottle bottle base showing feathered scar dulled by heat treating bottle showing seams th
Post a Comment
Read more

One complete bottle and two basal fragments of amber-coloured American “Export Beer” bottles (what we would today consider a lager bottle) were found at False Creek Flats with “R & CO” in an arch on the base. This mark was from Reed and Company of the Massillon Glass Works, Massillon, Ohio ( Lockhart et al 2017 ). All were mould-blown and the complete bottle has an applied crown finish. The glass is thick – 5 mm or more mid-body. Diameter is 6.5 cm, height is 23.8 cm. Volume would be approximately 12 oz - smaller than most other bottles with this mark. Export Beer bottle made by Reed and Company #51         Bottle bases #51, 52, 53 – digitally altered to show the less obvious “O” below the numbers. All three are marked with “R & Co” in an arch over a number – the two base fragments are “34” with an embossed dot above it, while the complete bottle is “41” with no dot. Basal fragment #52 has a ghost “34” above the final “34”, and all of them have a faint capital “O” below the nu
Post a Comment
Read more 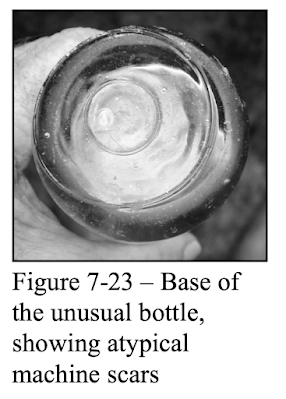 Sandra Ratch, M.A. April, 2022 I do not want anyone to think I am criticizing Bill Lockhart or suggesting that he has not contributed greatly to the knowledge of bottle making in the 20th century. On the contrary, without his work, we would have little information to go on. Here, I just think I found a better theory to explain this strange mark on the bottom of this bottle. (Bill Lockhart has read this post and agrees with what I've found). In 2010, Bill Lockhart described a bottle found in El Paso that had an odd mark on the base ( https://sha.org/bottle/pdffiles/EPChap7b.pdf , p. 252, Figure 7-23). You can see that the mark is two concentric circles, offset from the bottle and at 1+ cm apart from each other. At the time he could not attribute a machine to the making of this bottle. Lockhart 2010 (2000):252 This same bottle was again discussed in another Lockhart (N/D:7) publication and the O'Neill 1911 patent was ascribed to the bottle. The image below shows a valve on the ba
Post a Comment
Read more 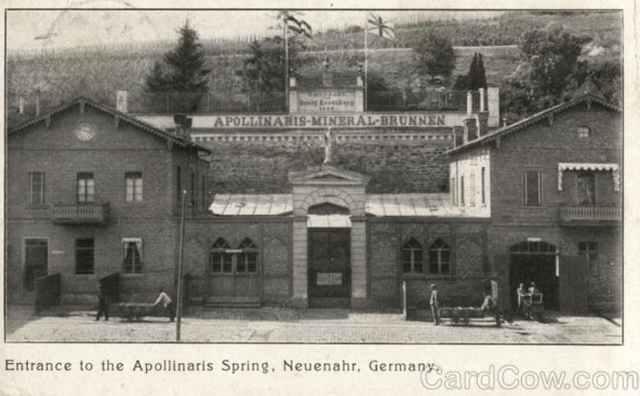 The Apollinaris Mineral Springs in Neuenahr, Germany, played a significant roll in bringing the Owen's automatic bottle blowing machine to Europe as they were the fist ones to license the machine in Europe (Biram 1958:21N). The Owen's machine was the first fully-automated bottle making machine ever patented, and it changed the future of bottles and bottling forever - allowing for large numbers of inexpensive glass bottles to be made. The Coca-Cola plant in Neuenahr stands in the same location as the old Apollinaris plant, and most of the buildings you see here no longer exist. The spring is still present on the edge of the Coca Cola campus, and one of the old buildings in the following photographs still stands across from the spring. Arched entrance to the Apollinaris spring, Neuenahr, Germany - the spring itself was behind this building. A fountain could be found behind the arched doorway. Apollinaris plant also showing the white arched entrance to the left Apollinaris plant w
Post a Comment
Read more

Ring Seal Beer / Champagne Bottles from False Creek Flats in Vancouver  Champagne is considered one of the most exclusive wines in the world. It is a sparkling wine that comes from the Champagne region of France grown by Champenois  vine growers. The true Champenois growers grow grapes in the Champagne district on expensive land with expensive ground conditioning practices and are sold to Champagne producers.  In 1900, the Victoria Daily Times (July 6, 1900 p.7)  had an add from Pither & Leiser in Victoria – wholesale agents:  Within this ad it clearly shows that Champagnes were doing well in North American prior to weather problems that started in the growing season of 1902. Mumm’s did especially well in 1899: By the beginning of the 20th Century, the cost of being a Champenois grower had made it prohibitive for most growers. The process of making Champagne was also expensive given the long labour-intensive process of producing Champagne, and loss due to exploding bottles. Weather
Post a Comment
Read more
More posts